Creation– Proof There Is A God

Posted by Brother John Jones on August 3, 2020
Posted in: Religion. Leave a comment

The levels of required proof

20 For the invisible things of him from the creation of the world are clearly seen, being understood by the things that are made, even his eternal power and Godhead; so that they are without excuse:

21 Because that, when they knew God, they glorified him not as God, neither were thankful; but became vain in their imaginations, and their foolish heart was darkened.

Most Bible studiers are very familiar with the words of Scriptural text above. We often observe natural creation around us and clearly see evidence that is all must have had a Maker, a Creator. We see an order that simply could not have arisen of or by itself. That is what the verses quoted above are in essence saying.

Proof of that designed order can be seen at even a deeper level of physical existence. This article will reveal that pattern of order in a way that until recent times could not be fully appreciated.

The two objects to be considered could not be compared until modern technology allowed them to be. And yet, there is a third proof to be added to these two.

From The Macro To The Micro

Above is a pictorial illustration recognizable to be the known pattern of order of the “solar system of planets that the Earth is embedded in.

It has some key distinct features that are also recognizable.

We know that at its center lies the Sun. We know that each planet has a fixed orbit that has been thus far continuous. That each orbit has but one planetary body in it.

And a closer looks reveals other physical phenomena; comets, asteroids, and gas clouds that are interwoven into the solar system of planets that act in harmony with its workings and preservation. 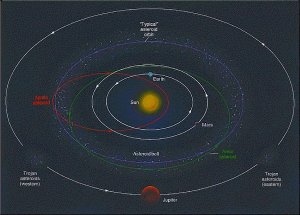 It is hard to believe that all of this order came from a chaotic, uncontrolled diffusion of matter.

`Order` is a controlled `Effect` that has to have a controlling Causation. Stated simply, `Order`begets `Order`.

There had to be a PRIME MOVER

Those who believe in an uncontrolled ‘big bang’ creation are left to answer, “What or Whom was the prime mover?”. The concept of ‘Order‘ resulting from ‘Random Choas‘ is foreign to real science.

The Solar System is the first “object” of our comparison. And now the second.

Bohr model of the atomic structure at top and bottom. Rutherford model, center

At the left, is what is known as the bohr model of the atom (Rutherford model also shown). As with the Solar System of the Sun, it too has some key distinct features that are also recognizable.

First, the nucleus exactly like the Sun is the center mass that the electrons orbit in distinct valence bands. Two planets cannot share the same orbit around the Sun and the same is true of electrons as they orbit the single nucleus.

With the invention of powerful ‘Super Colliders’ like the Large Hadron Collider (LHC) near Geneva, Switzerland (below), gives humans the capability to examine the atom and atomic behavior at an incredible level. Research has revealed much more activity than has been presumed. Atoms are made not only of electrons, protons, and neutrons; but, they are also made of other smaller particles that act in conjunction with or upon the larger ones.

The Solar System and the atomic structure compare in ways that could not be the result of a coincidence. One from our vantage point is huge and the other is infinitesimally small. Yet they are the same basic pattern in design.

While explorers have located celestial bodies orbiting other celestial bodies in other regions of the universe, nothing like the highly complex solar system of the Sun has been found. In that regard, it remains totally unique.

This certainly does not fit with what is known about the ‘random drift’ or ‘splay’ of general uncontrolled diffussion. If you were to spray water from your water spray bottle forever, you would not see this phenomena.

There is no rational explanation other than these creations are the result of intelligent creation by a PRIME MOVER.
The Prime Mover who created all things is the One and Only, Almighty God.

And a third proof of fixed order in the universe rather than chaotic diffusion of matter is the fix order of the constellations.

If the universe is the result of some unprovoked mass ejection of matter in a great uncontrolled path of diffusion, then what explains the fact that the constellations, although complex in order, maintain that established order without flying away from one another in varying directions (non pattern-splay)?

Once again, this does not agree with what is known about the behavior of diffusion from a mass uncontrolled ejection of matter into space.

What controls them and what causes them to be bound together?

The Holy Bible points to the only reasonable answer to these questions in Job 38:31-33.:

31 Can you tie the Pleiades together
or loosen the bonds that hold Orion?

32 Can you guide the stars season by season
and direct the Big and the Little Dipper?

33 Do you know the laws that govern the skies,
and can you make them apply to the earth?

Another thing translation expresses it this way:

31 Can you fasten the chains of the Pleiades
or loosen the belt of Orion?

32 Can you bring out the constellations[a] in their season
and lead the Bear[b] and her cubs?

33 Do you know the laws of heaven?
Can you impose its authority on earth?

These are the words of the Creator Himself, as He reasons with His servant Job. In fact the entire chapter is Almighty God pointing to proof that there must be a Prime Controller and a Prime Mover of all things. And that is He.

Much of humankind has stubbornly rejected the clear proof of God’s existence for the very reasons stated in the Book of Romans in chapter 1 and verses 21 and 22.

21 They know God, but they do not give him the honor that belongs to him, nor do they thank him. Instead, their thoughts have become complete nonsense, and their empty minds are filled with darkness.

They say they are wise, but they are fools; (GNT)

The similarity between the pattern of the construction of our solar system and that of the tiny atom, as well as the fixed, unchanging order of the constellations gives ample testimony to the existence of God.

Give Him the honor and praise He deserves.

I was taught in public school in 1960 that the solar system is an atomic structure and why.

Since that time, teaching this truth has disappeared from curriculums and isn’t mentioned anywhere.

It is to cover up flaws in a big bang accidental universe. It cannot explain this order as a result of random diffusion.
The big bang was the only explanation they could think of to explain how the cosmic material got dispersed. But explosion collapse eventually. Evidence indicates the opposite is happening to the universe.

What does physics 101 teach?

“A ball a rest when put in motion”…This is the beginning to understand the concept of how potential energy gets transformed or converted into kinetic energy.

That happens if the ball at rest is set in motion down a potential gradient slope. It falls some distance or height or potential drop.

So, instead of the initial mass at rest exploding, it was send down such a gradient carving it’s own path due to it’s enormous mass and momentum. Imagine a bullet being fired into a wall; a channel is made from motion and mass.

As it traveled down the slope, the friction caused from resistance to it’s forward momentum created a tremendously super-heated plasma cone that separated nuclear bonds and dispersed materials from the mass into it’s wake..the materials that make the physical universe. We are actually following the ball in what it is leaving behind as it continues it’s path forward.

This model explains why the cosmos shows signs of growth the not collapse. It is because the process is ongoing and has no reason to collapse.

The creation was orderly and it produced order. That’s why we behold order.

The big bang was all they could think of. They had a confirmation bias that excluded a truly objective search for truth. Things that disprove it are squelched and covered up.

The ‘Firmament’ and ‘Space’

Hebrew concept of the firmament above creation

Firmament is a descriptive word of Hebrew origin.

The Hebrew word for this is raqia (pronounced ra-KEE-ah). Biblical scholars understand the raqia to be a solid dome-like structure.

The Big Bang theory offers no explanation for how the space was created for an explosion to occur. How was the space produced and what is it contained within? According to the big bang approach, there is endless open space out there.

But remember, before anything occured the great mass sat at rest. It must have rested on a platform of greater strength of material in order for its weight to rest upon it. Therefore, not all is empty space. There must be a firmament above.

Examining a natural physics approach, the initial mass set in motion down a gradient would create a firmament, a substrate in a semi-softer material (similar to carbon or graphite but extremely densely dark matter) and leave substantial residual dust and debris from the carving.

That dust and debris are both heavy and they effect the disposition and placement of materials along the slope.

As it falls it creates a cascading carpet effect with internal eddies, vortexes, and depressions creating an internal ‘ripple’ effect down slope.

Motion is the ‘start up’ to energy conversion as physics 101 teaches us. And yet, it never entered the minds of scientist to put ‘motion’ into their calculus. Perhaps because ‘initial motion’ necessitates a ‘Prime Mover’ or Master Controller.

Albert Einstein’s theory regarding a “time/space continuum in operation in the universe involves a constant, (k) which is equal to ‘the angle of some fixed slope’.

Fluid dynamics play a key role in the perpetual motion of the cosmos making a time/space continuum possible.

The cascading residual dust plus the angle of slope are key how the universe is laid out like a carpet and provides a stream and direction for “time/space” to flow. It is the same principle of a stream water running continuously down a mountain side.

The Big Bang theory offers no fixed slope for a time/space continuum to exist. The explosion would propel materials in all possible directions. There would be no fixed slope and yet their diagrams mysteriously create one. Also an explosion will separate physical structures but will not separate atomic bonds or structures.

The Big Bang theory offers no fixed slope for a time/space continuum to exist. The explosion would propel materials in all possible directions. There would be no fixed slope and yet their diagrams mysteriously create one. Also an explosion will separate physical structures but will not separate atomic bonds or structures.